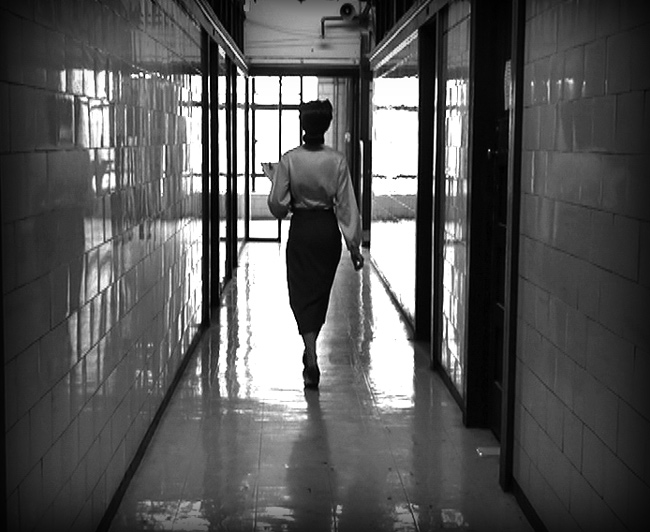 [A pdf scan of the original catalogue is available here]

There is something immediately familiar about the images occupying the two screens of Corridor. Perhaps these images are moments from a half-remembered film, a background cinematic detail now brought to the fore. The costuming and hairstyle, the black and white photography, and the aspect ratio of the projected image suggests classical Hollywood cinema of the 1930s or 1940s. As the images are further considered, it becomes apparent that film is only one of various mediums evoked here, as Corridor oscillates and shifts amongst various mediums. The seamless loop of the video points towards digital reproducibility and the DVD, or PC-based viewing and editing and the ubiquitous video mash-up or ‘super-cut’ found on sites like YouTube. [1] Simultaneously, the grainy video artifacts visible in Corridor, and typical of standard-resolution consumer-grade camcorders, seem to reference earlier VHS-based video art which similarly recycled familiar pop-culture images.[2] More recently, various contemporary art practices, notably Tracey Moffat’s video collages [3], embrace the low-quality aesthetic of rented VHS-tapes even though the works are presented on DVD in the gallery.

Kelly Richardson’s photographs of low-budget horror film tapes playing on her television are particularly interesting in this regard, and in relation to the aesthetic of Corridor. Transferred to large prints, Richardson’s static images freeze in time fleeting shots of landscapes emptied of figures, drawing attention to moments that would otherwise go unnoticed.[4] Richardson’s work revels in the specific artifacts of VHS, and uses these to produce a ‘landscape’ with its own peculiarly eerie character. However, the work also draws our attention to these otherwise ignored yet fascinating cinematic places: to the elements of their generic creation in a Hollywood studio and also to their place in the subconscious of our cinematic memories.

The various mediums evoked in Corridor point towards the relationship that this work has with these artistic practices of pastiche. However, the choice apparent in Corridor to produce a stylised re-creation of the cinematic, rather than for direct re-appropriation of existing material, signals an intent and effect that also diverges in significant ways from the works just discussed. Watching Corridor, an uncanny feeling soon dawns on the viewer, as it becomes evident that the setting of the videos is the building in which Blindside gallery is located. In presenting the viewer with images shot amidst the corridors of the Nicholas Building, through which the viewer has recently journeyed, the familiar has unexpectedly recurred. Such involuntary repetition is amongst the various conditions for the uncanny identified by Sigmund Freud in his famous essay on the topic.[5] Significantly, the example Freud offers of his own experience of the uncanny involves his disorientation during a walk through a small Italian town, in which he finds himself repeatedly returning to the same street, and unable to find his way. Typically, Freud eventually returns the uncanny to his interest in repression. Yet Freud’s own analysis has already pointed us away from the temporal, which so dominates his discourse and its rhetoric of unconscious repression, and towards the significance of the spatial, which is not necessarily simply subordinate to the inexorable movement of the temporal. There is certainly something strangely fascinating about physically inhabiting a space seen previously on a cinema screen, or in recognising a familiar place from our daily lives transformed into a cinematic memory. Indeed, someone familiar with Melbourne may find this later experience one of the few pleasures to be found in Ghost Rider (Mark Steven Johnson, 2007) which was recently filmed here in Melbourne. Conversely, visiting movie locations has become a common form of tourism, ranging from the Neighbours tour of Ramsay St, to the 11 hour tours of the locations of Vertigo (Alfred Hitchcock, 1958) offered by San Francisco tour guides.

Generally, a guiding principle of video art that appropriates popular imagery is the construction of a commentary on, or subversion of, the codes and language of the media. Corridor is a pastiche composed of impressionistic re-creation rather than straight re-appropriation. The specific effect of this choice, combined with the work’s use of the Nicholas Building, is to engage with the way that the language of the media encodes, or overlays, our experience of the physical environment and the quotidian world of our daily lives. This effect in Corridor has thematic resonances that can be productively traced across other works in Simone Hine’s artistic practice. Woman with Red Object (Ipswich Art Gallery, 2006) and its installation of a chair and a red-handbag, quite literally imbued these banal objects with cinematic memories: the bag contained a small screen displaying a looping fragmented film in which these objects appeared, if only as apparently incidental details. In the videos that formed part of Fragment (Institute of Modern Art, 2002) and On This a Night Like Any Other (Brisbane Powerhouse, 2004), everyday Australian landscapes were transformed into imagery reminiscent of Hollywood sci-fi, horror and period drama, via minimal costuming, editing and sound, and always with standard affordable consumer-grade equipment. In these multimedia works, the performers physically present on the stage seem to multiply, via costuming and staging, and interact with their screened images. Here, the boundary between screen and physical performance is flattened, and mediation is treated not as an effect, but as an inevitability that can be productively explored rather than overcome or negated. In On this a Night… the viewer, on their way to the work ‘itself’, passed by performers in the grounds of the Powerhouse who they would soon see in the same setting in the work’s videos. This gesture further expanded the work’s play with the superimposition of the media onto the space of the viewer.

In Hine’s practice cinematic potentials seem to permeate the everyday. Corridor does not just provide a cinematic interpretation of the place in which the gallery is located, but instead engages with the idea that the language of cinema encodes our experience of place. For me, the Nicholas Building immediately invokes an era I know primarily from films, particularly film noir, and it only seems natural to find the door to a private investigator’s office inhabiting the third floor as I imagine Philip Marlow strolling the corridors.[6]

The consideration of space in cinema is an area of research that has had significant attention over the past decade and this has often focused on the relationship between cinema and the city. Film noir has had particular prominence in the theorisation of this relationship.[7] As with the broader ‘spatial turn’ across the humanities, the philosophy of Henri Lefebvre has been extremely influential here. Across disciplines Lefebvre’s triadic conception of space finds itself repeated, comprising: ‘spatial practice’ (the perceived and the physical), ‘representations of space’ (the conceived and the mental), and ‘spaces of representation’ (the lived and social). What is interesting about Lefebvre’s concepts is not their typology of various components of space, but the interaction between these components. For Lefebvre, the dialectical relationship between the concepts of his triad is always crucial. [8] The character of spaces and places is a negotiation between these various elements, as Victor Burgin writes, “The city in our actual experience is at the same time an actually existing physical environment, and a city in a novel, a film, a photograph, a city seen on television, a city in a comic strip, a city in a pie chart, and so on.” [9] It is this relationship that the site-specific videos of Corridor engage with.

Burgin’s analysis of various urban theorists leads him to reassert the importance of the world made over by its cultural mediation, against those theorists who would separate their analysis of the ‘real’ city from such cultural effects. Certainly, this separation is often difficult to manage, for as Roslyn Deutsche has noted, the very structure of the analyses by these same urban theorists (notably Edward Soja) itself seems to mimic to the masculine gaze of the film noir detective.[10] A key characteristic of the noir detective is their mastery of space, as they uncover the hidden truths of the city and navigate through the treacherous urban environment. In Corridor, the figure of detective is absent, but the detective’s gaze still haunts the videos. The videos here divide the Nicholas Building into static images focused on various details of the space, recalling the detective’s division of the crime scene into discrete and analysable fragments.[11] Corridor also focuses on details of the body of the lone female figure in the video. Women in film noir inevitably signify ‘trouble’, and must be controlled by the detective, but their troubling influence extends across genres, and beyond the role of the femme fatale, to find particular expression in films that represented the work environment of the skyscraper. Films of the 1930s that were set in the relatively new and mixed gender workplace of skyscrapers like the Nicholas Building[12] exhibited deep concerns about the disruptive entrance of women into this work environment. These films, reflecting broader social attitudes, represent women’s sexuality as a destabilising force in the skyscraper workplace, with its long hours, crowded elevators and busy halls full of men, threatening to propel women into situations that could compromise their morality.[13] Brief shots of women’s legs and ankles in these films served to atomise the female body, situating the body of women as a commodity amongst many in the emerging consumer society while emphasising the disruptive sexuality women were seen to introduce to the workplace.[14]

Both urban space and women needed to be monitored in the cinematic era alluded to by Corridor, but without an explicit narrative to organise the space and the woman’s body, the imposition of order flounders. Narratives may be alluded to in Corridor, but they remain unfulfilled, frustrated by the video loop. The loop creates a labyrinthine space, constantly returned to and never mastered or resolved. This is a spatial situation which, as we have seen, so troubled Freud, that always entertaining detective of the unconscious constantly in search of clues that would solve his cases. Further to this, the space of the Nicholas building itself has a labyrinthine quality. The ascendency of the modernist glass-curtain skyscraper would bring with it the cybernetic modularity of the open-plan office scheme as well as the more general modernist preference for sunlight, ventilation, and white surfaces stemming from fears of tuberculosis.[15] Before this, as evident in the Nicholas building, skyscrapers had a more claustrophobic quality, full of darkened spaces which serve to give Corridor a slightly sinister overtone. This subdued tension is also furthered by the increased role of off-screen space that the buildings twisting corridors create, and the inherent suspense of the potential for off-screen dangers that cinema has trained us to be so aware of.

Corridor does not create a totalising or complete interpretation of the space of the Nicholas Building and its cultural connotations; rather the work alludes to the many simultaneous layers that construct a place. Place is not only defined by a historical succession of events, but maintains traces from across its history. These traces are superimposed onto the place at any given moment, and filtered through broader languages and histories, be these social, architectural or cinematic (and much else besides). Amongst this palimpsest of its urban space, the Nicholas Building’s current role in the economics of the culture industry has particular resonance for the interpretation of Corridor.

2. Christian Marclay’s Telephones (1995), or Dara Birnbaum’s Technology/Transformation: Wonder Woman (1978-79), for example. The later work is currently available in its entirety at: http://www.dailymotion.com/video/x4y5e5_dara-birnbaum-technologytransformat_shortfilms

6. The door remains, though, this office now contains the office of an architectural firm.

7. Of this literature, Edward Dimendberg’s Film Noir and the Spaces of Modernity (Cambridge, MA: Harvard UP, 2004) is particularly noteworthy.

11. On this process, and its relation to cinema, see Dimendberg, p.27.

12. The Nicholas Building was completed in 1926 and built to the maximum height allowed in Melbourne’s CBD at the time.