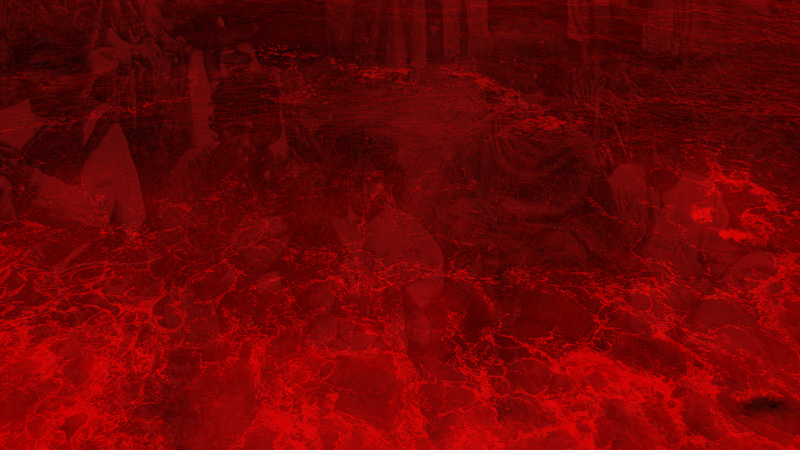 [A pdf version can be downloaded here]

This exhibition brings together video work by three emerging artists based in South-East Queensland: Libby Harward, Callum McGrath and Sancintya Mohini Simpson. Each artist’s work emphasises place, and the specificity of the local sites where they were filmed and in which the works dwell. The works layer repressed histories over these landscapes, remembering forgotten stories, while looking to the future and transforming these places via the specific possibilities of video.

Libby Harward’s Already Occupied – Yuwayi! Jana-n-ba Wunjayi! (Goodbye! Go away now!) (2018) is part of an ongoing project that, often through site specific actions and their documentation, asserts Aboriginal sovereignty. Via drone footage, this iteration of Already Occupied presents documentation of temporary performative installations undertaken by Harward on the beaches of Minjerribah (North Stradbroke Island) and Mulgumpin (Moreton Island), which are part of Quandamooka Country.

William Fox suggests that the relationship between aerial views, art and governance are more apparent in Australia than anywhere else. In part, this is because the expansion of colonisation across the continent was simultaneous to the technical development of aerial photography.[1] Propelled by its value in military strategy, the aerial image was technically refined, ultimately leading to the contemporary era of consumer-grade drones, Google Maps and cheap plane flights that have made aerial perspective a part of the everyday. [2] While the exploitation of the Australian landscape continues to be made possible by Airborne Electromagnetics (AEM) which survey the environment for mineral deposits. [3] The centrality of the aerial image in Australia, however, is not tied only to exploitation but, more importantly, to the role of the aerial imagination in Aboriginal cultures. This is particularly evident in desert painting, typically associated with a bird’s eye view, which perform connections to ancestral sites and stories. [4]

Amidst the backdrop of the sandmining that has transformed the geography of Minjerribah, Harward’s video usurps the instrumental use of the technical aerial image, so often used in the service of mining and, instead, uses this technology to emphasise her connection to this country. The flattened perspective created by the work’s aerial view places Harward as a part of the landscape, rather than strictly separable from this. As such, Already Occupied asserts the significance and ongoing importance of the aerial imagination for a sustainable connection to place, rather than short-term extraction for capital accumulation. Similarly, the objects Harward uses – star pickets, ‘hi-vis’ traffic cones and plastic bollards and safety mesh – suggesting the vernacular of construction or mining, are de-instrumentalised here. In the actions documented by the drone, these items act to temporarily ritualise and protect Harward’s place on this land. Rather than isolating a section of land for construction and mechanical transformation in the service of capital, as such objects might usually be used, here they are enlisted to facilitate spiritual expression.

With their symbols of construction, and aerial documentation, Already Occupied can also be understood as a subtle commentary on Land Art. The aerial view has been central to seminal works in this tradition, such as Michael Heizer’s Double Negative (1969) and Robert Smithson’s Spiral Jetty (1970). Both the conception and documentation of these works has been reliant on aerial images. [5] Harward’s work shares with Smithson this aerial view and also the suggestion of the environment as an assemblage of human intervention, industrial ruin, and geographic forces. Heizer’s and Smithson’s monumental works, whose physical forms have already lasted decades, double the industrial transformation of geography that they comment on. In contrast, Harward’s interventions are transient; strung with signs of temporary work, they are soon washed away, maintaining their distinction from nearby industrial incursions. Communicated only via the long shots of aerial documentation, the significance and experience of these interventions is held for the artist alone, keeping the viewer at a distance, left to consider the pasts, presents and futures of these sites.

Sugared Land/s (2019) continues Sancintya Mohini Simpson’s tracing of her matrilineal heritage, descended from indentured Indian labourers taken from India to South Africa to work in sugar plantations. Sugar plantations occupy a significant role in human history and the shape of the world today. The cultivation of sugar plantations in Madeira in the fourteenth and fifteenth century established a brutal regime of technological exploitation, forging systems for the management of labour and environment that would foreshadow both the global expansion of colonialism and the industrial revolution. [6] Refined and sold in Europe, sugar produced enormous wealth for European nations through both the invasion of other lands and the use of slavery to extract maximum profit from the labour intensive process of its cultivation. [7] After the abolition of slavery, over one million ‘contract labourers’ from India were sent over oceans to work on plantations to fulfil the resulting shortfall in cheap labour. [8]

The first word in Simpson’s poem, spoken over images of cane fields, oceans and archival photographs, is “coolie”. This word, often with pejorative intonations, has been used to refer to this global diaspora of Indian labourers. Recently, writers like Gaiutra Bahadur have reclaimed this term, wanting to remove the shame so often associated with indenture, and to emphasise the ongoing effects of colonialism, rather than hiding this. [9] Simpson’s work is in this tradition, and gives voice to a history that often remains unspoken in shame.

While Simpson’s ancestors were indentured in South Africa, the images of cane fields here, filmed in South-East Queensland, speak to the global ramifications of this industry, as is emphasised by the “/s” in the work’s title. Indeed, in the late-nineteenth century, plans to introduce Indian labour were an ongoing and highly politicised issue in Queensland. Designs to encourage and expedite indentured Indian labour were used as a strategy to embolden the North Queensland separatist movement, which considered cheap labour essential, as labour shortages threatened the sugar plantations thought to be central the economic future of the colony, despite the South Sea Islander labourers already contracted in servitude. [10]

The abstraction of these global flows of labour and capital are given a physical immediacy in Sugared Land/s, with ocean waves lapping the shore, superimposed over the rush of sugar cane fields. Tinted red, Simpson’s images imply the continued echoes of both blood spilled and blood ties. The archival photographs further interwoven with this, picturing indentured labourers, are sourced from eBay: bodies still traded and commodified. Contending with the lack of records, Simpson’s ongoing archival research re-contextualises these images to tell alternative histories. The formation of this history in Sugared Land/s, like the other works in this exhibition, seek a personal remembrance of the past, while emphasising ongoing political impacts and futures. In the context of the environmental destruction and colonialist labour exploitation still being wrought by the sugarcane industry, [11] Sugared Land/s resonates across place and time.

Callum McGrath’s Toro (2019) is part of a suite of three videos set in a fictional future, where the industrial suburb of Brisbane, Pinkenba, has been rezoned as an area for queer living. Far from the idea of a self-organised queer community emerging organically within major cities as sites of self-expression and self-determination, McGrath presents a dystopic future where state sanctioned zoning implies external control and isolation of queer identifying individuals. In the absence of a specific reason for this future rezoning, the audience is left to draw connections to instances in the historical past and present where state control over queer bodies has been, and continues to be, exercised.

The body is the focus of this video, but it is never represented visually. Instead the viewer is bought into the body of the unseen protagonist via the first-person camera angle. As the ever-moving gaze scans the landscape, initially from a moving vehicle and later on foot, a sense emerges that the viewer is cruising these locations. The slow panning camera that is usually conceived of as a disembodied gaze, is here embodied from a queer perspective that is embedded within the specificity of known sites for cruising.

Cinema has long been associated with the mechanised flows of the car, usually within the historical context of the two technologies as they were experienced within the urban landscape of Los Angeles. [12] Re-contextualising this mobile cinematic gaze, McGrath shifts the location from the centre of the city to the industrial periphery. Exploring specific locations as sites for cruising brings into focus McGrath’s fictional narrative, isolating queer bodies from the usual flows of the city.

Anne Friedberg has noted that driving can produce psycho-geographical effects that align with the Situationist notion of the dérive, a process by which the individual moves through cities without utilitarian purpose, allowing oneself to be drawn to attractions as they present themselves. The dérive is a critical gaze, but one that emphasises its specificity, an experience of space located in the temporality of an individual, rather than doubling the totalising, hegemonic gaze implied by state-sanctioned control. [13] Driving differs from dérive in that the gaze is enclosed within the private space of the car, and flows at a mechanised speed. [14] Toro begins with this drifting gaze from inside the car, scanning desolate industrial streets. The attraction is, again, not represented visually, but implied as the gaze shifts from the private space of the car to the more haphazard movement of the protagonist walking through the landscape. Being drawn into the landscape acts as a metaphor for what remains unseen. Focusing on the very specific act of moving through the landscape shifts the focus away from usual narrative cues toward the psycho-geographical effects of the landscape on the individual.

Karl Schlögel writes that driving through the landscape at night, a recurrent trope of film and television, suggests a time of reverie, or thinking back over the past. [15] This remembrance is implied by the solitude of McGrath’s slowly moving images. In mainstream cinema, such moments of reverie are a speedbump, which only momentarily slow the forward momentum of the narrative. McGrath isolates this trope, inhabiting it to undermine narrative certainty and circumscribed destinations. In this way, Toro is tied to the notion of disidentification as developed by José Esteban Muñoz. Rather than outright rejection of prevailing forms, or simple identification with these, processes of disidentification suggest a third way: recycling and reworking dominant forms in order to transform them, and to create space and voice for disempowered subjectivities. [16] The remembrance of past violence is inseparable form contemporary and future manifestations of queer identity.

Across these three video works, landscapes are not captured, but instead are created via specific representational strategies. As Reinhard Braun notes, landscapes are always actively produced,[17] and these works emphasise the political tangibility of this production, where identities and geographies are interwoven across pasts, presents and futures.

5. Ttrantow and Holzer-Kernbichler, 62, 93-4. The importance of aerial imagery also evident in documentation of Smithson’s work collected by its institutional caretaker, Dia: https://www.diaart.org/collection/spiraljettyaerials Return

6. Raj Patel and Jason W. Moore. A History of the World in Seven Cheap Things: A Guide to Capitalism, Nature and the Future of the Planet. London: Verso, 2018. 16-29. Return

16. José Esteban Muñoz. Disidentifications: Queers of Color and the Performance of Politics. Cultural Studies of the Americas 2. Minneapolis: University of Minnesota Press, 1999. 11-12, 31.Return

The exhibition was also presented at Metro Arts in February 2020 as part of Loop, in conjunction with the Metro Arts, With Love festival.

Return to the main page for this exhibition here.